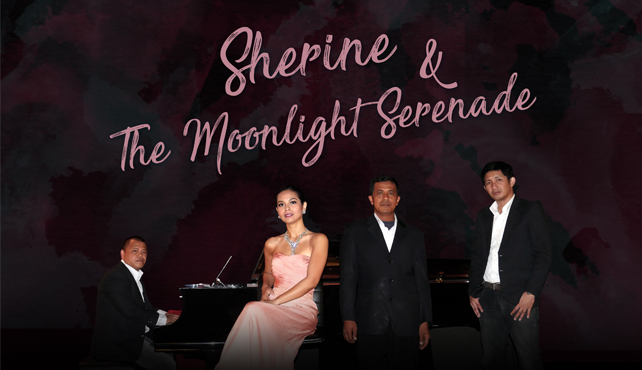 Sherine Bahar was born in Jakarta in 1980. Her love for music was cultivated since early childhood by listening to the legendary Michael Jackson and learning violin. In her teenage years she began to take vocal lessons with the legendary Elfa Secioria. As a teacher and mentor, Elfa brought Sherine touring across Asia and Europe with a very solid vocal group called Elfa’s Jazz and Pop Singers. The band won numerous competitions and performs at jazz and pop concerts around Indonesia as well as abroad. During the busy years with Elfa’s Jazz and Pop Singers, Sherine joined the famed talent show competition Asia Bagus and became the 1st week Champion. She released a recording album together with talent scout Yovie Widiyanto back in 2005, titled “When Sherine Sings Yovie’s Best,” and began to sing solo professionally.

In 2006, she joined musical theatre for the first time as a supporting cast, and developed a passion for the performing arts ever since. She performed as the main cast for two productions back to back in 2014 for April Love and in 2015 for Love Story. She was cast in a supporting role in 2016 for Musikal Khatulistiwa.

Since childhood Sherine is always fascinated of how a good song completes a good movie. Paying special attention to movie soundtracks and also music illustrations. For example, how John Williams accompanied E.T, Star Wars, Superman, Jurassic Park, Harry Potter, etc and really made these movies even more memorable and iconic.

Exclusively for Motion Blue Jakarta, Sherine would like to share her love for Original Motion Picture Soundtracks with the help of fellow singer and movie lover, Yanuareza. Accompanied by The Moonlight Serenade with Robert on piano, Yoga on bass and Taufan on drums.  Watch Sherine & The Moonlight Serenade Ft. Yanuareza riveting performance on January 12th & 13th, 2018. Enjoy a free Welcome Drink with every ticket purchased. PURCHASE NOW at www.motionbluejakarta.com or RESERVE at reservation@motionbluejakarta.com . CALL +62-21-29039189 for more info