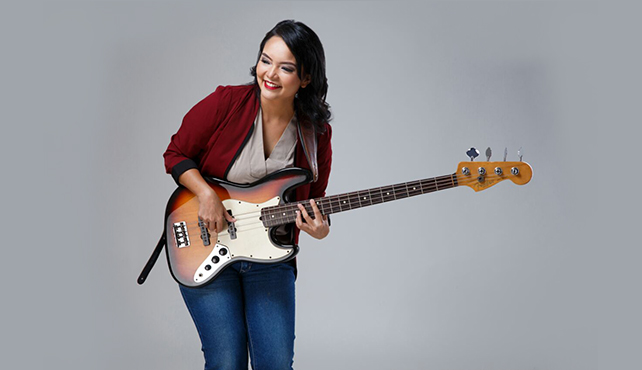 33 years old Jakarta native, Sheila Permatasaka, has been actively playing bass since 2003. She began her music education in LPM Farabi with mentors Indro Hardjodikoro, Adi Dharmawan, and Ilyas Muhadji among others. She participated in numerous music competition. Notable ones are being the best Bassist in Jakarta Cultural Festival and first place winner (with Starlite) in Festival Jazz Goes to Campus UI 2004.

In her professional music career, Sheila became the bassist for several best Indonesian singers such as Gita Gutawa, Dewi Sandra, Vidi Aldino, Mike Mohede, Denada, and many more. She participated in many festivals and jazz community as well as cultural events in various genres.

Her first recording project is with Starlite releasing an album titled “Our Journey” in 2014. The album is produced with the band that was founded in 2004 comprising of Jeane Phialsa (drum), and Rieke Astari (piano) also several singers that helps in the album such as Olive Latuputty, Grace Sahertian, and Eno ‘Darajana.’

At the beginning of 2017,  Sheila decided to make an original solo bass album called “Midnight Superstar” with her band called The Upmost  produced by Yessi Kristianto and Indra Aryadi. There are 6 tracks in the album with 5 instrumental tracks featuring well known drummers such as Echa Soemantri, Handy Salim, Jeane Phialsa, Dimas Pradipta, and Australian  drummer Brody Simpson. One of the lyrical song called Lullaby was sung by Evelyne Hutagalung dedicated to Sheila’s son named Hans. Currently, Sheila is still playing actively as a bassist in many music performances as a player, organizer, and composer.