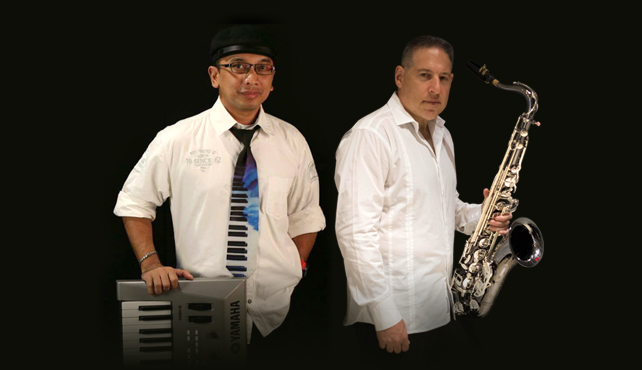 Rio Moreno is a pianist, composer, arranger who formed one of the best Latin Jazz band in Indonesia. Since the band was formed back in 2005 it has gone through several well-known personnel. Currently, Harry Toledo on Bass and Handy Salim on Drums comprise the main core group of Rio Moreno Latin Combo. This Trio sounds different from all of the rest because they play a unique blend of Latin Jazz (Afro-Cuban Rhythm) that mixes Salsa, Samba, Bayon and Cha Cha among others. Rio also creates his own original arrangements and his music is greatly inspired by Arturo Sandoval as well as Michel Camilo. In December 2012, Rio launched his debut solo album titled “EL Montuno” to glowing reviews. Bronx native, Mitch Frohman, is one of the top saxophonist/flutists in the music scene. His versatility in different styles of music has led him to many opportunities of playing with the greatest musicians in the world (including 6 Grammy Award winning records and numerous Grammy, Latin Grammy & Billboard nominations). For 25 years he was the sax and flute soloist with The Tito Puente Orchestra and Latin-Jazz Ensemble. Currently, he is touring the world as the sax/flute soloist with the Grammy award winning Spanish Harlem Orchestra. Mitch has also played and recorded with many well known Latin-jazz artists such as Machito, Celia Cruz, La Lupe, Eddie & Charlie Palmieri among others. Mitch's newest project is his Latin-Jazz Quartet. His new album with the Quartet titled “From Daddy with Love” has gotten worldwide attention, climbing to #16 on the Jazzweek radio airplay charts. He has also just been awarded the 2016 Latin Jazz USA "Chico O'Farrill" LIFETIME ACHIEVEMENT AWARD. Consequently, Mitch signature solo sound can be heard somewhere in the world, every day, as he is the saxophone soloist on the theme song of the mega-hit T.V. show SEX & THE CITY. Watch Rio Moreno Latin Combo Ft. Mitch Frohman electrifying performance Live at Motion Blue Jakarta on December 9th & 10th, 2016. Don’t miss a special screening of the documentary “For The Love of The Mambo” by Dr. Marsha Baxter at 7pm. A must watch for Latin music lovers as it features the Grammy nominated Mambo Legends Orchestra (former members of the Tito Puente Orchestra) and the Latin Ensemble of the Crane School of Music, State University of New York. PURCHASE NOW at www.motionbluejakarta.com or RESERVE at reservation@motionbluejakarta.com . CALL +62-21-29039189 for more info.