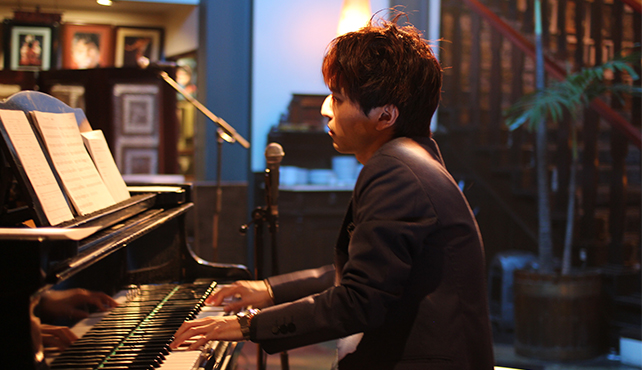 Rei Narita is a Composer, Pianist, Producer and the owner of “studio luna azul” label. He is one of the leading smooth Jazz artists in Asia, supported not only by core Jazz fans and adults, but also younger generations whose attention has been caught by this new Jazz style. Rei Narita has been highly evaluated overseas and received numerous offers from smooth Jazz’s country of origin America and Europe’s in- ternet radio stations, as well as being broadcasted all over the world.

His activities in Indonesia started in 2015 from a one man live in Indonesia’s largest Jazz event, JAZZ GOES TO CAMPUS International frame, and events such as, JAVA JAZZ ON THE MOVE and KAMPOENG JAZZ. Rei Narita has also performed in events such as, JAPAN WAVE EXPO, ENNICHISAI and JAPAN FOUNDATION. As a composer, he has also composed the NHK WORLD’s Coming up, and the Opening Theme for NHK’s Contemporary Public Opinion’s Opening Theme, as well as the music production of Documentary programs. Has been reviewed by German Smooth Jazz experts and praised as, “Immaculate Diamond” and “The Kaleidoscope of Attractive Melody.” His cover single of SADE’s Smooth Operator has reached number 1 in Amazon’s New Jazz Fusion division ranking (2015).  Rei Narita has also produced two albums The Color of Soundscape (2011) and The Color of Soundscape 2 (2015).