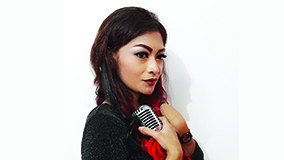 Starts listening Jazz since she was 7 years old, at that time, she was more into fusion stuffs. At the age of 14, she began to sing hip hop classic such as Arrested Development, Sister With Voices, Mary j.Blige, and sometimes did rappin.

As time goes by, she took a vocal jazz lesson in 1999 by Otty Jamalus and at the same time she also took jazz workshop called Workshop Jazz dan Anda I & II by Tjut Nyak Deviana Daudsjah for 1 year and she began to Love SWING JAZZ n Bebop.

In the year of 2002, she studied Jazz and also sang with Idang Rasjidi for more than 6 months in Jamz, on tv program Jazz Club and Jazz events. Then in 2003 she built her own Jazz Band performed as guess star at many Jazz events/programs in Campus/ Universities.

She ever stopped singing temporary for 1-2 years because she did her thesis with the tittle "An Analysis of Metaphor in Standard Jazz Song Lyrics", she graduated as Sarjana Sastra majoring in Linguistics at Universitas Nasional Jakarta.