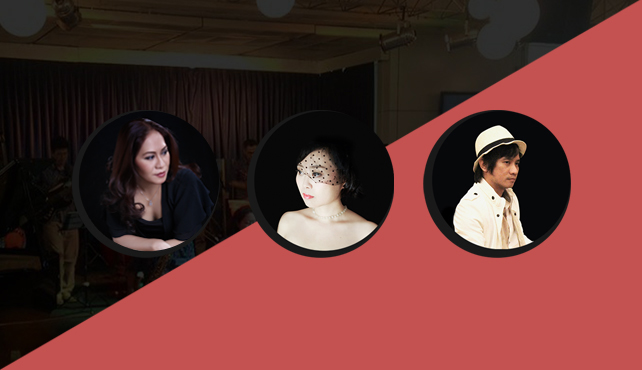 Bossa Nova singer, Mercy Dumais, is a Latin Jazz figure for Brazilian music lovers in Indonesia. Mercy is involved in many Brazilian music performances as well as performing in many musical events related to Brazilian Cultures. She sings in Portuguese fluently and makes her appearance very well received in the Brazilian embassy. Mercy has frequently performed in the Brazilian Independence day in Jakarta since 2006. She also has represented Brazil for Gala Latina Blanca 2012 in Jakarta, held by Ibero American Associattion ( IAA ). Mercy is currently making her recording album, which will release soon as possible this year.

Kaori Mukai was born in Fukuoka, Japan to parents who love music. At an early age, she began playing the electric piano and school brass band, as well as started vocal training with Mits Yamada in 2010. In Feb 2012, Kaori made her stage debut performing on “Roppongi Satindoll” in Tokyo. Since 2014, she’s been studying under Clyde W. Williams Jr. Kaori moved to Jakarta in 2016 and has been actively performing as Jazz/Musical/Pop singer in both Jakarta and Tokyo.

Roberto J studied piano from the age, electone, keyboard, and organ from a very early age. He started to begin his journey as a full time musician after graduating from Binus University majoring in Computer Engineering. Until now he has performed on stage with various musicians both locally and internationaly as well as playing various genres. Currently, he is also working as a session musician, arranger, recording artist, and music lecturer at Pelita Harapan University as well as Aminoto Kosin Music School.

Galaxy Big Band is an amateur Jazz Orchestra that was established in 1992 by Japanese expats working and living in or near Jakarta.  Currently, the band has around 20 members and often collaborated with Indonesian vocalists, Neea Rachma, who has become a part of the Galaxy Band for several years.