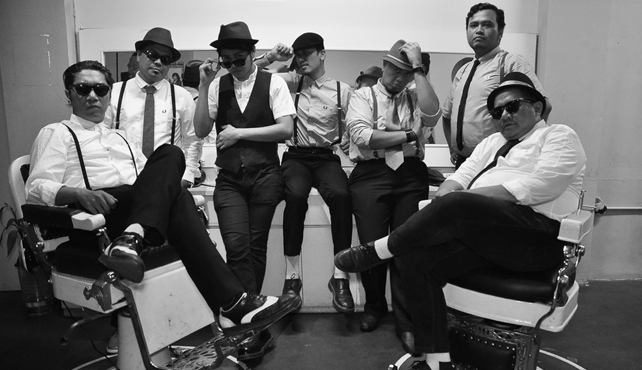 Leonardo and His Impeccable Six (LAHIS) is one of Indonesia’s top swing jazz big band that's recoginzed both locally and internationally . LAHIS was started when Leonardo Ringo was on a break from his band “Zeke and The Popo” and decided to publish a solo album titled The Sun in 2010. The Sun was named the best album of the year by Rolling Stone Indonesia and Trax. In the solo album Leonardo included brass section and decided to pursuse it further. Hence, LAHIS was born with Leonardo Ringo (Vocal/ Guitar), Dharmo Soedirman (piano/hammond), Susan Agiwitanto (bass), Christo Putra (English drum) as well as horn section : Daniel Sukoco (Baritone sax), Andreas Pardede (trumpet), and Wahyu Maliki (trombone). In 2011, with this powerful sextet formation LAHIS began to perform in festivals locally and overseas. In 2013, LAHIS came out with two successful swing albums titled Mirrors and Built to Race respectively.