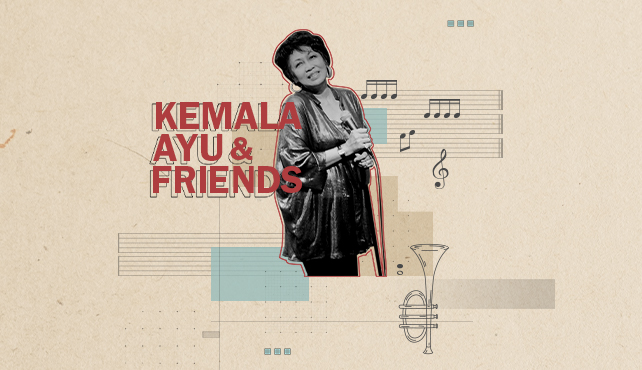 Kemala Ayu moved to Jakarta at 17 and Captain’s Bar hired her to perform with Denny TR from Karimata Band, Idham Nursaid, Ronald Panjaitan and singer Enrico Tobing. From that moment on Kemala Ayu continually began to develop her career in the jazz scene. She formed a jazz group called Canizaro and then became the vocalist for well-known Latin Jazz Fusion band Black Fantasy during the 1980s popularized through the song called “Buat Kamu” or “For you.” She formed another group called Spirit Band and produced two albums. Later, she became the vocalist of Hydro Band for 5 years (with Helmie Indra Kusuma, Dewa Budjana, Rudy Subekty, Ronald Panjaitan, etc). She was also the vocalist for Trigonia Band (with Idang Rasjidi, Yance Manusama, and Cendy Luntungan) as well for 5 years. Kemala Ayu has released two albums: Emotions (2007), and Headlong (2011) as well as a mini album Lima+ (2013). Starting October 2017 Kemala Ayu has been a show staple in Motion Blue Jakarta performing twice a month to great reviews.

Price Includes:
•    Entrance Fee for 1 person per show
•    ONE Free glass of Welcome Drink
•    Entertainment Tax & Service Fee
IMPORTANT:
•   No refunds can be made if reservation canceled by the guest.
Once payment is made through the website. You can choose to
select your seat(s). For more information and seat layout details
please email reservation@motionbluejakarta.com or
WhatsApp: +628118690690
•   Unpaid Reservations can only be held up to 24 hours