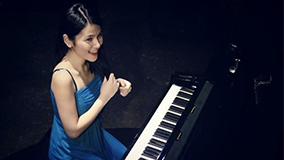 Originally from Indonesia, now currently based in Sydney, pianist Francesca Prihasti is a remarkably gifted musician. Francesca has already shared the stage in Sydney with some of Australia's best Jazz musicians: such as Dave Goodman, Richard Maegraith, Carl Dewhurst, Andrew Dickeson, and she has also performed with Dale Barlow as his side women in 2011 with SIMA at the Sound Lounge.