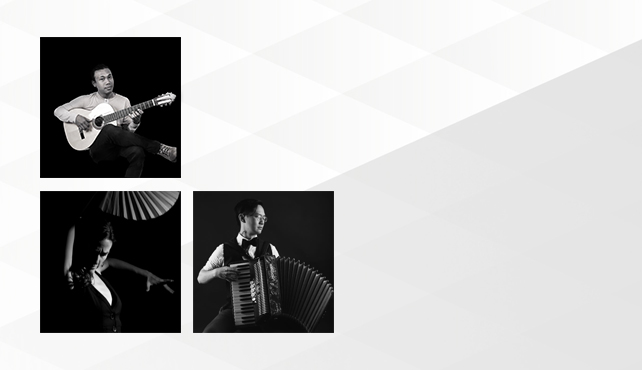 Angela Lopez Lara (Spain, 1979) graduated in 2002 from Conservatorio Superior Joaquín Rodrigo (Valencia), and continued studying piano with L. Chiantore until 2007. Surrounded by flamenco from a young age, she specialized in Spanish piano repertoire learning from Spanish legends A. de Larrocha, J. M .Colom, and L.F. Pérez amongst others. During the course of her lessons with the legends she was often praised for her refined execution of the tunes and rhythms of the andalusi folklore. Her love for dance and singing made her studied flamenco dance at the Centro Profesional de Danza  (Valencia) and Centro de Arte Flamenco Amor de Dios (Madrid) as well as contemporary dance at Estudio de Danza María Carbonell (Valencia). Since 2004, she has been performing all around Spain, Argentina, and Indonesia as a pianist, dancer, singer and actress with companies such as  “Eureka Teatro” , “Tercero Izquierda Teatro” or the “4 hands & 4 feet piano” duet, and even composing the music and choreographies for several productions. From 2010 to 2012 she was awarded the Darmasiswa scholarship to study Indonesian traditional music dance at the Indonesian Institute of the Arts (Yogyakarta), focussing on balinese dance and studying at Sanggar Seni Satriya Lelana, (Batuan) during 2013. Since researching traditional Indonesian dance, she has created experimental dance works such as “Flamenpati” (2012), combining Balinese dance with flamenco, which is included in her last performance, the show-conference “TARI BALI. Dioses, ángulos y bronce” (2012). In collaboration with the Indonesian Embassy in Madrid, Ángela often offers conferences and performances all around Spain.

Adien Fazmail (Jakarta, 1981) studied Musicology at Jakarta Institute Of The Arts, and graduated from Farabi (Lembaga Pendidikan Musik) in 2009. Indonesian guitar legends Donny Suhendra and Agam Hamzah were also Adien’s teachers as he learned both acoustic and electric guitar in the fields of blues, rock and jazz in more in depth. He played regularly at talk shows in TVRI since a young age as well as became session player for various artists such as J Rocks, Astrid, Afgan, and Anda Perdana. He has performed with Donny Suhendra and Agam Hamzah at Bandung Jazz Break Revival (2009), Agam Hamzah Acoustic Connection at JAK JAZZ (2009), and at SuddenJazz Jakarta (2011).  In 2012, Adien became an ambassador for Indonesian Local Guitar Brand “Stephallen.” In 2014, Adien focused his career towards Flamenco guitar, studying in Spain with Carlos Gómez. Currently, he plays regularly and gives workshops in collaboration with the Spanish Embassy in Jakarta. Adien is also the ambassador of Vicente Carrillo´s guitars, one of the best luthiers in the world, whose guitars have been used by maestros such as Paco de Lucía.

Andreas Arianto is a music producer and composer who is always interested in assimilating and incorporating many different types of musical genres in his works. With Boy Marpaung, Andreas released a collaborative platform, Forteboy Music Project, to collaborate with various crossover musicians, such as Gerald Situmorang, Asteriska, Damez Nababan and Celtic Room to name a few. He studied composition with Bernd Asmus and Otto Sidharta, and clarinet with Henning Schröder at the Universitas Pelita Harapan Conservatory of Music. Back in 2008 he was appointed as music director for Slank's concert tour to six cities with his orchestra. Now he still actively writes new concert pieces, film scores and arrangements.

Back by popular demand, Flamenco Night this time will feature producer and composer Andreas Arianto for an even better production. Don’t miss their exciting performance live at Motion Blue Jakarta on April 13th & 14th, 2018. Flamenco Night with Angela Lopez & Adien Fazmail where the passion and power of flamenco blends with the beauty and richness of Indonesian culture.  Enjoy a free glass of Welcome Drink with every ticket purchased. PURCHASE NOW at www.motionbluejakarta.com or RESERVE at reservation@motionbluejakarta.com . CALL +62-21-29039189 for more info.

Price Includes:
•    Entrance Fee for 1 person per show
•    ONE Free glass of Welcome Drink
•    Entertainment Tax & Service Fee
IMPORTANT:
•    No refunds can be made if reservation canceled by guest.
Once payment is made through the website. You can choose to
select your seat(s). For more information and seat layout details
please email reservation@motionbluejakarta.com
•    Unpaid Reservations can only be held up to 24 hours.
VIP SOFAS ARE AVAILABLE BY GROUPING