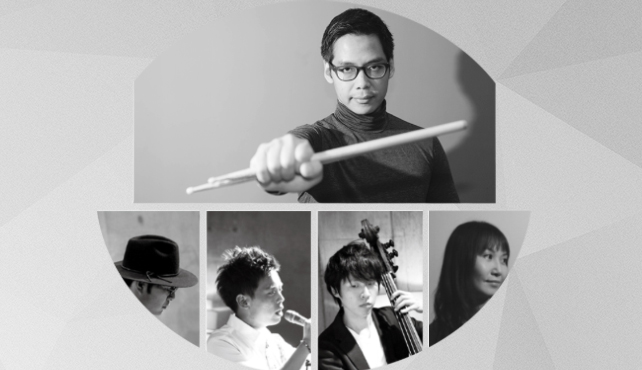 Dion Subiakto is born in Jakarta in 1981 and started his music journey by learning classical piano at an early age. At age 10, he learned to play the drum through autodidact. He has a special four way independent technique (ostinato) that he often combines starting with Latin rhythm to Ethnic. Until now he performs with one of the fastest guitarist from Indonesia I wayan Balawan in the group Balawan Bifan Trio, senior jazz pianist Glen Dauna in the project tribute to Jimi Hendrix, Indra Lesmana in the project tribute to Chick Corea, and latin jazz pianist Nita Aartsen. Dion also frequently play as a session player in Twilight Orchestra and Dian HP Orchestra. Besides playing drum, Dion often makes his own composition as well as jingles, and music for film illustration.

Yoko Yamazaki is the Tokyo-based Jazz/Brazilian music pianist leading her own Brazilian crossover music project named “Laranja”  At the same time she is one of the most demanded support pianist in the music scene in Tokyo. She began playing piano at age of four. After completing her classical music degree at conservatory in Tokyo, she went to jazz school, where she met Brazilian music which brought enormous influence on her since then. Her passion for Brazilian music, especially MPB, the modern mixture music in Brazil, is deeply integrated with such diverse music background of her. When she was a teenager, she originally wanted to be a rock pianist. She also loves jazz, R&B, pop and so on. In 2016,  she made a big success playing solo performance with her own project “Laranja” at Motion Blue Yokohama. In 2017, in Saõ Paulo, Brazil, she performed at various occasions including the world's largest Japanese festival “Festival do Japão”, which brought 180,000 people in 3 days.

Fontana Folle is vibrant new generation of vocal jazz group woven together by an intriguing group of multinational members. The group creates a new sound melting together Nicola Conte, Jazzanova and Jamiroquai. Formed in 2016, this Tokyo-based unit's diverse background absorbs the musical standards of Japan, America, Brazil, Italy and Southeast Asia. The androgynous vocals, reminiscent of George Michael and Sade, additionally colors the rich sound inspired by jazz, latin, and R&B. Fontana Folle released their first EP “PRIMA” in April 2017 and since then this mysterious unit made a big breakthrough. The group successfully performed at JZ Brat, one of the most prestigious jazz clubs in Shibuya, Motion Blue Yokohama, a group club of the world’s finest jazz club chain, Blue Note, and The Room, the legendary club led the acid jazz and club jazz movement in Japan. Fontana Folle means "crazy fountain". Let music flow crazily!